Salt is a vital commodity without which we cannot live.  It is so precious that it served as a currency and a method of payment in Roman times.  In fact, our word ‘salary’ comes from the term ‘salt allowance’ that was used to compensate soldiers in the Roman Army.  As essential as it is, salt is unevenly distributed over the surface of the earth.  It is today rendered ubiquitous by the workings of an efficient global economy that brings it to your household for a song.  But it has not always been thus; salt has been laboriously mined, transported and traded since ancient times along well established salt routes.  Communities living in proximity to salt deposits have variously traded it for gold, cloth, sugar, skins, ivory, pepper and even slaves.  North Africa abounds with salt deposits.  A vast deposit is found in the Danakil depression of the Afar region of north-eastern Ethiopia, part of the Great Rift Valley.  It was created over time by water flooding in from the Red Sea.  The Danakil Depression is a most inhospitable place, in fact it is the hottest place on earth where people work as a matter of routine.  It was once described as “a land of death” by the famous British desert explorer Wilfred Thesiger.  The primary industry there is salt mining and its transportation, and I went there last November.

Having driven all day through the harsh terrain of the Afar people, we arrive in the village of Dallol in the late afternoon.  Our makeshift beds for the night are strewn around huts in the open.  A few dozen foreigners or so are spending the night here.  There is also a strong military presence everywhere given the activities of the Afar Revolutionary Democratic Unity Front.  Two hours before sunset the 4×4 convoy leaves for the salt pans, led by military vehicles.  We drive through brown-black desert terrain which soon converts itself into a sea of white – we’re driving on salt.  At the edge of shallow water we stop for a break.  A sea of brine extends before us, with the setting sun shimmering on white waters.  It’s surreal.  The salt is hard under foot, and the ragged crystals form millions of patterns under the surface.  But this salt is too hard to mine.  It’s so compact you cannot dig it up, so we have to go further into the salt pans to see the mining activities proper. 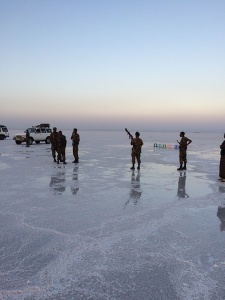 The next day our convoy travels through unbearable heat to the middle of the pan.  We spot a herd of camels from afar lying around the landscape, and turbaned people mining salt.  We eventually come to the salt mining area, which is nothing but a smaller area within the vast flat white expanse.  The miners, who work in the most unbelievably hot and arid conditions, use adzes to cut out salt from the pans into rectangular standard-sized blocks weighing 3kg each.  These are tied into blocks of four to be mounted onto the camels.  While the miners dig and cut, the caravaneers and the camels rest before their trek.  Towards late afternoon the packed camels are assembled into caravans and leave on a 2 ½ day journey to Mek’ele.  These miners must have one of the harshest jobs on earth.  In the past, they would be brought to the mining area on camels, but modern times have encroached and an Isuzu truck brings and takes the miners every day from Dallol. 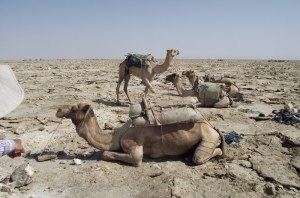 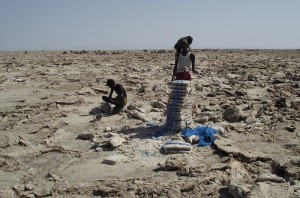 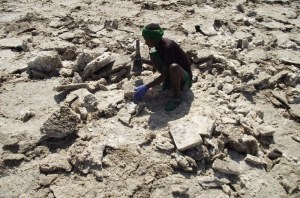 We back off from the mining area and in the late afternoon take up a position close to the caravan routes.  And then we see them emerge from the desert, the salt caravans, many, many caravans, camels all in single file, plying the routes as they have done since ancient times.  We get into the cars again and drive to a place closer to the camel paths.  Portable chairs get set out, as is food and drink.  Music plays from one of the cars and a party atmosphere reigns, armed soldiers or not.  But it’s the silence I want, so I leave the cars and move towards where the caravans are going to pass.  The sun is lower and the camels come, they pass really close up.  Long caravans of beautiful, elegant dromedary camels, the silent ships of the desert, carrying their precious cargo of salt. 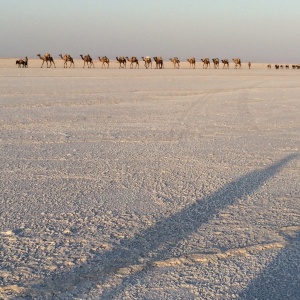 It is sunset.  One or two of the Afar cameleers step aside and kneel towards Mecca for their evening prayers, but the caravans stop for no-one, they just roll on.  A caravan is not the preserve of a single owner but is an arbitrary collection of traders who assemble for the purpose of mutual assistance and protection for the duration of the journey.  Curiously, I spot donkeys amidst some camels.  The guide tells me that poorer caravaneers have donkeys as they cannot afford camels.  I try to work out the economics.  The price of a donkey is 2000 birr, a camel 20000 birr.  A camel can carry twenty-six packs of 3kg salt slabs, a donkey only eight, thus a camel carries roughly 3½ times the load a donkey does.  A camel can work for twenty-five years as opposed to a donkey’s ten, and is much better adapted to desert conditions.  Of course, donkeys are only viable on shorter caravan routes like these that have water sources along the way.  My economic nous says that the relative price of the two animals must map onto a similar long-term economic return; people are savvy.1  But please, gentle friends, please, if you decide to go into salt caravanning, do have the elegance of using camels.  Don’t break my heart by traipsing beside a group of donkeys in the desert. 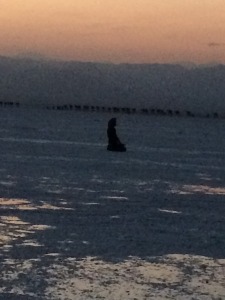 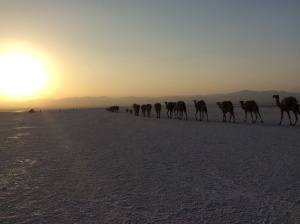 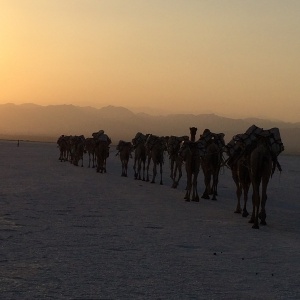 It’s a harsh life, and a lifestyle that’s under threat from mechanisation and competition from industrial mining companies.  As mentioned, even the salt miners are today transported by an Isuzu truck on a daily basis.  The next day we visit a modern salt mining site.  These are massive operations.  Dozens of huge trucks transport salt from industrial mines around Lake Afrera.  The caravans can in no way compete with the scale, the mechanised extraction procedures and transportation of the present-day salt industry.  A ten-ton truck can out-carry a hundred camels.  For the moment, the caravans are kept going by sheer pride and partly by the government who want the Afar to maintain their way of life, and perhaps for the purposes of quaint tourism. 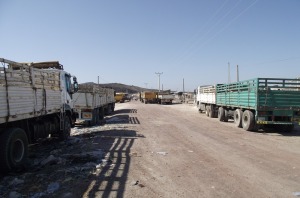 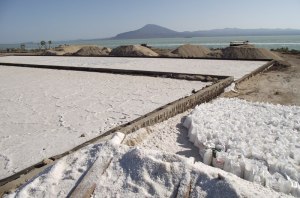 But as much as the Afar want to preserve their old ways, I fear there will come a day when the salt caravans will disappear.  So as I looked out at the sun setting over the salt plains of Danakil, watching the camels and their shadows move seemingly soundlessly across my vision, I gave thanks that I, in my lifetime, was able to experience the ancient mysticism of salt caravans shimmering across the desert.